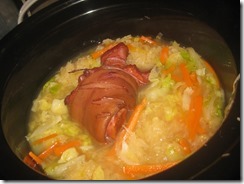 I can confidently say “ultimate” now that I’ve figured out that there is no one single “correct” recipe for this dish – despite the lengthy heated Facebook threads on the topic. The best one is the one that brings back my own family’s cooking traditions and childhood memories.

The name of the dish comes from the Estonian region of Mulgimaa and kapsad – well that’s just cabbage. Cabbage, sauerkraut (its preserved form) and pork, along with root vegetables like potatoes and carrots, played a large role in the cuisine of this part of the world. The dish began as a simple way to slow-cook a large piece of pork in its accompanying cabbage. Now, for me, it has become a popular side dish to be served at festive dinners.

I’ll typically make a crockpot full. It seems to go pretty fast at family occasions, and it’s even better the next day. (I might pass along my recipe for quick hapukapsa supp – sauerkraut soup – if you’re lucky.)

If you’re a purist, you can make your own sauerkraut. I usually just pick it up at the grocery store.

I usually make this in a slow cooker, but a large pot works as well (and it will be ready faster) – but watch to keep the simmer slow.

* I usually serve this as a side dish and the meatless version always seems to go over just as well one with meat. It’s not unheard of to make this with chicken or other meats. I like the pork version.

The easiest is to throw in a couple or three of slices of bacon, cut up. It works well. I have used smoked pork hock (too much trouble for too little benefit) and in my latest stand-alone version I put in about a pound and half of pork roast, cut into cubes and browned.

The proportions of the ingredients are not really important – you can vary them widely to suit your own taste.

Sauté the onions lightly. (I usually toss in the carrot and sometimes even the cabbage into the pan at the end, but it’s not necessary.)

Add the onion and the other ingredients to the slow cooker. They can stay in layers and do not need to be mixed together. The barley goes in last – as a layer on top.

Cook at a slow simmer. If needed, add a little more water from time to time to keep the barley covered.

After 2 or 3 hours of simmering, give the ingredients a stir.

After another hour or two, stir again and taste to check for seasonings. Often the sauerkraut is salty enough, so no more salt is needed. I like a small grind of pepper. The sugar is optional – I prefer a touch of sweetness in the dish.

Ok. It should be done. The barley cooks into the dish and gives it a nice creaminess. The cabbage cuts the sauerkraut to give it a nice mild flavour.

Maybe next time I’ll make my own

Barley on top and covered with water

Follow our RV travels on my other blog : Heading Down the Road

Welcome back. Here’s your flat tire.

A last look around ‘Las Jaibas’